Entering the most recent work by Jessica Stockholder, Your Skin in this Weather Bourne Eye-Threads & Swollen Perfume, the spectator is faced with a monument to both an exalted state and demanding elliptical logic. Over the past seven years Stockholder has made a variety of installations which straddle the boundaries of painting and sculpture while always responding to a specific situation and context. Using an ever-expanding vocabulary of found and store-bought materials, the artist’s disruption of architectural space by any and all means is a visual analogy for a similar disruption of thought. While each work appears to spring from a unique and untraceable source, there are in fact numerous central concerns and repeated elements which appear and reappear in new clothes over time.

In the artist’s most ambitious work to date, Your Skin occupies – or more appropriately – overruns the usually austere street level gallery at Dia. The viewer enters the middle of the piece. The initial effect is complete visual overload. A toxic green ramp launches one onto centre stage where the viewer is surrounded by what appears to be an arsenal of bargain bin and low-budget construction materials put to use by a hyperactive poststructuralist. The normal sense of perspective-imposed architecture is exploded as floors fold into walls into ceilings dripping with electrical cords. Each and every surface is interrupted, bisected, incomplete with a manic logic. Once the initial bedazzlement subsides, the viewer can begin to separate certain key elements, “landmarks” as it were, that only marginally help to orient the experience. As if forced through a funnel, one moves forward past a wall made from luscious pink carpet, veers through a passage formed by a tower of purple plastic crates nested hilariously in an upended swimming pool liner opposed by a mound of resin coated stuffed shirts, finally to stumble off the edge of a low platform into the “upstage” area. 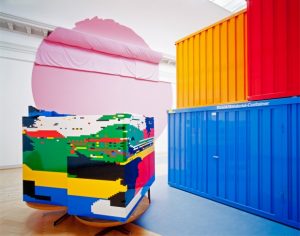 Still surrounded by the piece one finally begins to realize that there is an outside. A graphic metal lattice/window structure bisects the entire room, unobtrusively declaring the boundary between inside and outside the piece. Once one is aware of these boundaries, the urge for recul (distance) is unavoidable. Viewers end up pressed against the farthest wall of the space in order to collect the piece into some kind of coherent object. Here again, the viewer’s encounter is unresolved. What one sees is a tangled web containing numerous graphic elements failing – by design one assumes – to resolve into the picture subconsciously desired. Like the desire to see large cities from tall buildings, what one sees is not the object, but the sense of the place.

There is little doubt that Stockholder is a formalist, a colourist, perhaps even a disguised modernist. She readily admits painterly influences from Cezanne to Stella to Mary Heilman (a lesser known but influential abstract painter). The use of accessible materials, assemblage techniques and cubist space harken back to the aspirations of modernism. Her fascination with colour situates her more as a sensualist, almost romantic in her desire to create affect. Yet, as if unwillingly, the artist’s rather conservative ambitions cascade through an elaborate process which ends in outrageous confrontation with tradition.

If the limits of Formalism, its distancing from social context or pretentious self-absorption, are by now commonplace faults found by critical theory, Stockholder’s nevertheless remains compelling and unique. Its fractal referencing and pop sensibility save it from the near death of stuffy, overly serious research/illustrators of formal theories. The work seizes the viewer by being primary, spontaneous and graphic. It holds onto the viewer by sharing in an exalted state of tension. And this state is clearly poetic in intent: as is displayed in the work’s relentless return of every colour, form and spatial reference to abstraction. To that which is smaller than words and too fast for syntax.

As the artist states in the pamphlet accompanying the show: “I’m trying to get closer to the thinking processes as they exist before the idea is fully formed.” However compact and almost cliche this statement might be, it is a central indicator of both the artist’s process as well as an unspoken relation to phenomenology. Looking back at this and other works documented over the years, one begins to see a certain repetition of strategies that indicate a very consistent pursuit of a fundamental project. Her repertoire for each piece begins with disposable consumer goods (plastics, dry goods, household electronics) and readily available construction materials (plaster, paint, metal mesh, extension cords). All things that, in principle, could be found easily within the context of this or any piece she is currently involved with. From this stockpile the artist appears to work against the space, deliberately disrupting any inherent coherence of the architecture, transforming it into a place of constant variance. This fragmented space is then linked by colour which she applies in broad geometric sweeps across completely incongruous surfaces. But even here, each relationship is incomplete; large shapes often appear abandoned as if another task became more urgent. It is a process of extension, accumulation and studied incompletion whose sole ambition is sensory rush.

Though largely static by nature, her work becomes a kind of perceptual theatre, a field of constant flux and movement in which several impressions successively make their appearance, mingle or disperse into a web of possible ideas. Clarifying ideas is of little importance here; it is more interesting to suggest that each work is not a unique experience, but the same one in another language, location or time. Like the multilinguist repeating the same phrase, each time in another acquired tongue, one begins to notice the subtle shifting of meaning at each utterance. As Deleuze suggests in Difference and Repetition (1994): “Repetition changes nothing in the object repeated, but does change something in the mind which contemplates it.” Staying with the work reveals little of the artist; instead, the work becomes a spectator’s encounter with his or her own thoughts. There is a para-sense that works backwards from the very material language of the work back into the fascinating communication between the disjointed faculties of our perceptual process. In a process called “compounded abstraction” by Larry Weschler, the spectator begins with that which is named (a lamp, a milk crate), steps back to where one can only isolate zones of focus (but not name them) and ends in perception itself, in the region of undifferentiated sensations (Seeing Is Forgetting the Name of the Thing One Sees, 1982). 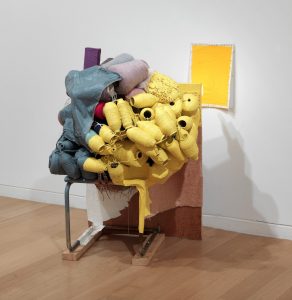 In a strange twist, Stockholder shares common ground, through interest in vision and thought, with such minimal formalists as Robert Irwin or James Turrell. Whether rigorously pursued or not her work speaks ultimately of phenomenological processes – throwing any understanding of the work in the viewer’s lap, unburdening it of any significant presence of the artist. Unlike the minimalists however, she achieves this through excess, distortion and pleasure. Stockholder’s work is inclusive, open to both casual and serious encounters alike. Likewise, one is not obliged to go beyond pure surface – there is certainly plenty of it – unless imposed by the viewer’s own rigours. The experience of this installation goes a long way toward undoing and rethinking formalism in a period where its original idealism has been replaced by both irony and literalness. In this unlikely environment, Stockholder injects a healthy dose of robust pleasure mixed with turbulent thought which is difficult to “know,” but equally difficult to overlook.